The Short-Attention-Span School of Photography

As mentioned elsewhere, I am not primarily a photographer, I'm an author who makes photographs.  My father, Milton "Hal" Halberstadt, was a photographer whose work was primarily studio images used in advertising during the 1950s, '60s, and early '70s.  Beginning at the age of twelve I worked in his studio summers.  What I learned was that advertising photography was a very serious business, at least the way he did it, and I just wasn't that serious.  I did, however, get to see some very creative people at work, some from the advertising world, some from the art photography world.  Ansel Adams was then just getting famous and was living in San Francisco at the time.  He'd drop by the studio around tea time and have a drink or two with whoever was around.  We reciprocated fairly often and stopped at the Adams' house on the way home.  The great landscape photographer William Garnett was another frequent visitor.  Imogen Cunningham was another.  Other artists, most from my parent's student days at the Chicago Institute of Design -- "Bauhaus West," dropped by quite often.  From late afternoon till six or seven in the evening a mixed bag of creative people could be found sitting around a big table in the studio drinking martinis and smoking cigarettes and discussing art from every angle.

Good photographs are MADE, not TAKEN

Hal took photography very seriously.  One sure way to provoke a tirade from him was to say something like "I took this picture."  "We don't take pictures, we MAKE PHOTOGRAPHS!!!!" he always insisted.  So naturally I used to provoke him with that phrase until he finally caught on that it was a joke and then he could smile about the tease.  But he had a point -- his kind of photography involved careful composition.  His images could take days to compose and just making the exposures on 8in by 10in Deardorff cameras an entire morning.  His photographs were made, not taken.  Mine are more often taken rather than made.

The secret to success in photography is "f8 and be there"

But I went in a different direction, sometimes with the same weapons, and when I use a camera it has often been while stalking a moment and then taking a picture.  That's because my work has been primarily as an observer in some kind of drama or passion play -- I get to tag along with Green Berets, Recon Marines, SWAT cops, surgeons in the ER, Amish farmers harvesting oats.  My kind of photography sometimes involves being in the right place at the right time and pushing the shutter release to "take" an image that becomes a "picture."  And other times I pull lots of things together and build a photograph sometimes the way my father did.  Both ways work, both are valid, and both can be a lot of  fun.  Especially with modern digital cameras, the technology can be quite subordinate to the process of seeing an image before it is created, and the photographer can either take the image or make the image he or she has in mind.  The documentary tradition involves placing yourself somewhere you think a useful picture will wander by and then being ready to grab it when it shows up.  There's a legend that a great National Geographic photographer was once asked how he made his spectacular images and his reply was "f8 and be there,"  meaning that the camera is set for good exposure and that the camera and operator are in position when the moment is available for capture.

When In Doubt Get Closer

Most photographers seem quite timid about how they make their photographs, particularly those of people.  The old advice, "When in doubt get closer" certainly applies to portraits but is useful for anything else as well.  It's another way of saying, "Use the whole frame."  The only problem with this is that it asks you to be more confrontational than otherwise.  Longer lenses certainly help get closer and I use 200mm to 3,000mm lenses for that purpose, but sometimes the best way of seeing something is with a shorter focal-length lens that is very close to the subject. 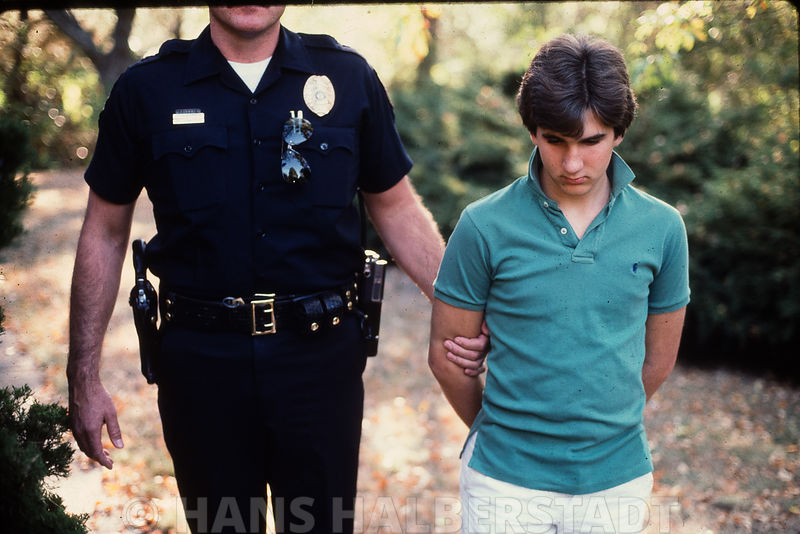 Juvenile Under Arrest
Part of a project for the County of Contra Costa, California. The kid is an actor, the cop is a cop. This photograph was made, not taken. 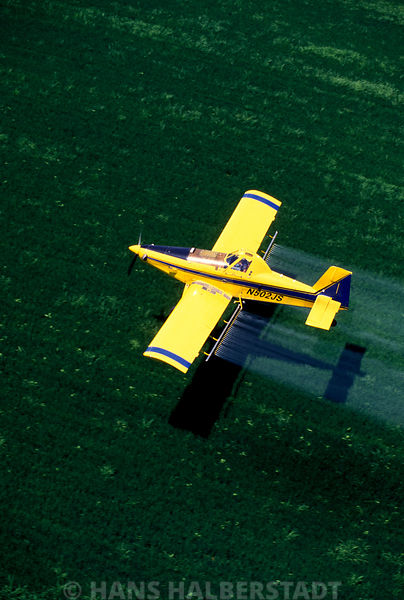 Crop-duster aircraft over rice, Willows, California
This is a "made" photograph, rather than a "taken" one. I hired the crop duster and a helicopter to get over it. That's water being sprayed. I had an idea for an image and then put the pieces together to make it happen. And I framed it this way, vertically with room at the top and bottom of the image, for use as a magazine cover or brochure page...back in the day when such things were common and a working photographer needed to anticipate an image's end uses. 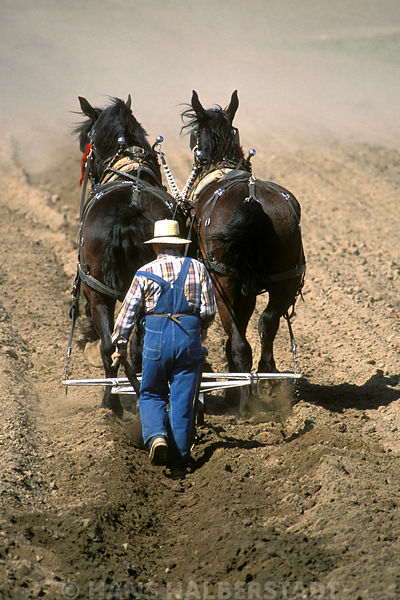 George Cabral with two dark Belgians.
So much of my photography involves designing a photograph in my head before picking up a camera, then selecting camera, lens, location, time of day, need for tripod, and sometimes permissions, before actually making exposures. In this case I was working on a book about farming and wanted lots of working horse power and that involved a lot of research long before any photographs were made. 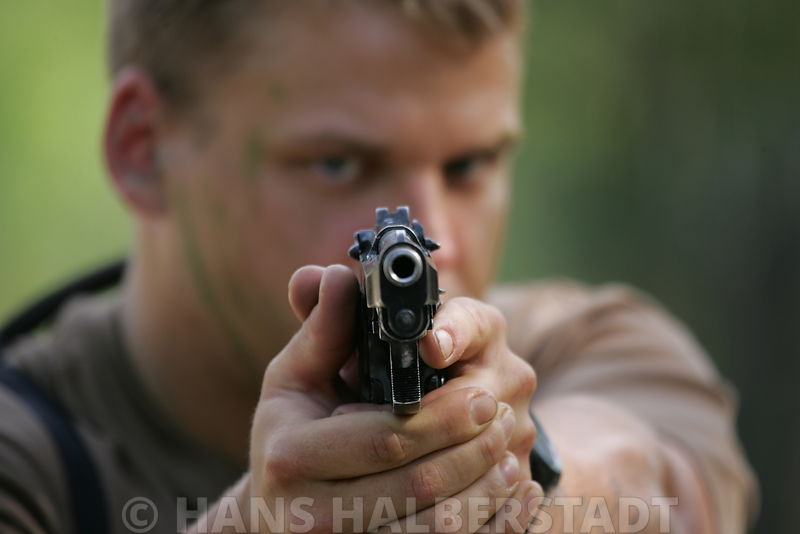 US Army Sniper School class on the M9 pistol.
I made this photograph by asking the soldier to point the weapon directly at the camera, an angle not often used for some unknown reason. 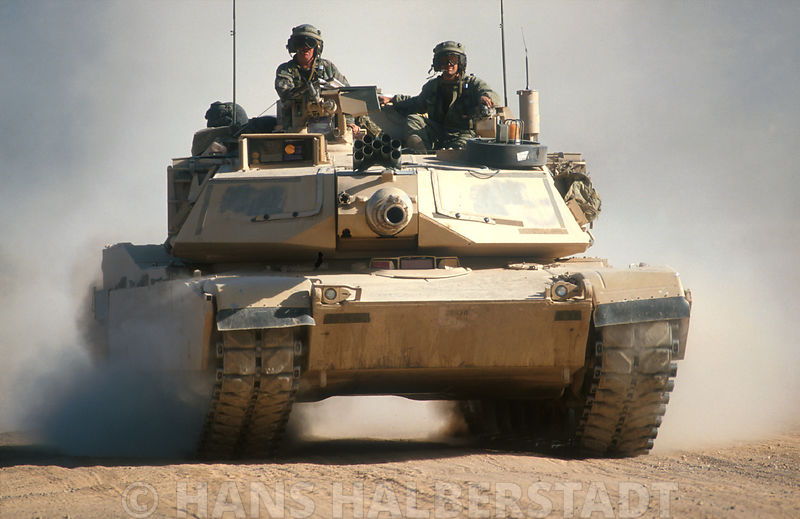 M1A2 Abrams Main Battle Tank
I made this photograph while standing beside a dusty trail at Fort Irwin, AKA the National Training Center. The gunner is tracking me with his computerized gun-sight so we are looking right down the bore. 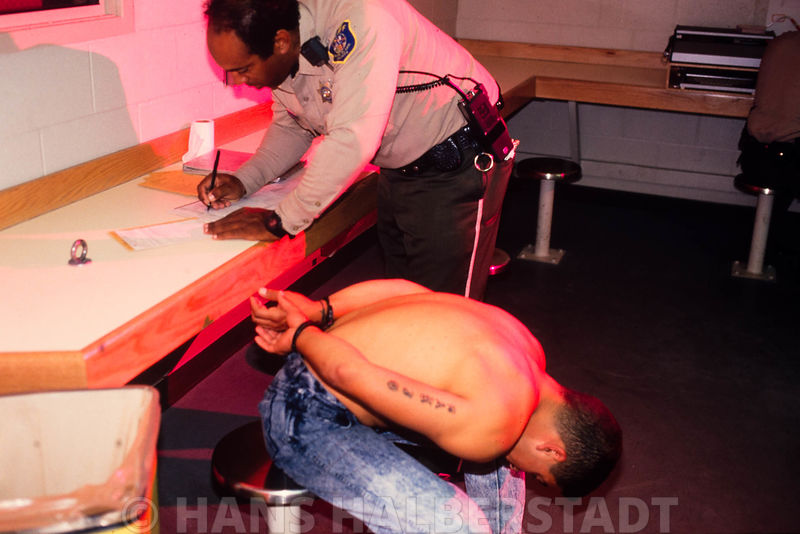 Central Booking, Main Jail
You see all sorts of people at Main Booking. This one is a gangster but nearby was a handsome lady in business suit and high heels, bawling her eyes out after a DUI arrest. 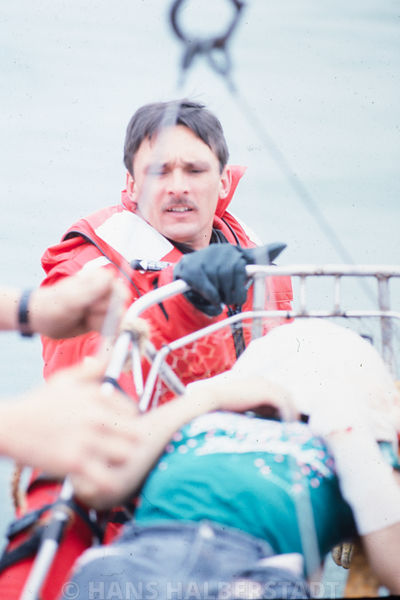 Body of Bridge Jumper
The body of this young woman is still warm. She jumped from the Golden Gate Bridge about ten minutes before this photograph was taken. I was working at the Coast Guard station nearby when they got the call. The crew of that station are informally known in the Coast Guard as "The Body-snatchers" because they do this so often. This is a "taken" picture rather than a "made" photograph. 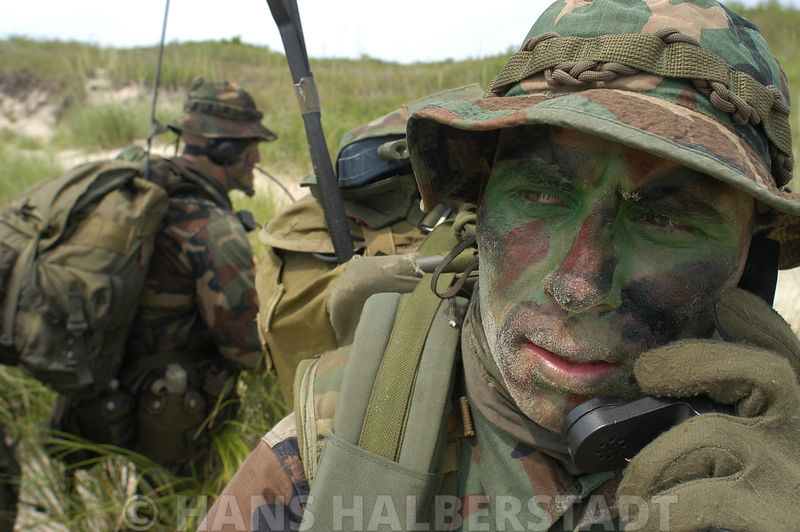 Recon Marine using MBITR radio and H250 handset
This is a good example of "when in doubt, get closer." The camera is about 24in from the Marine. This is from a week at RECON school at Fort Story, Virginia 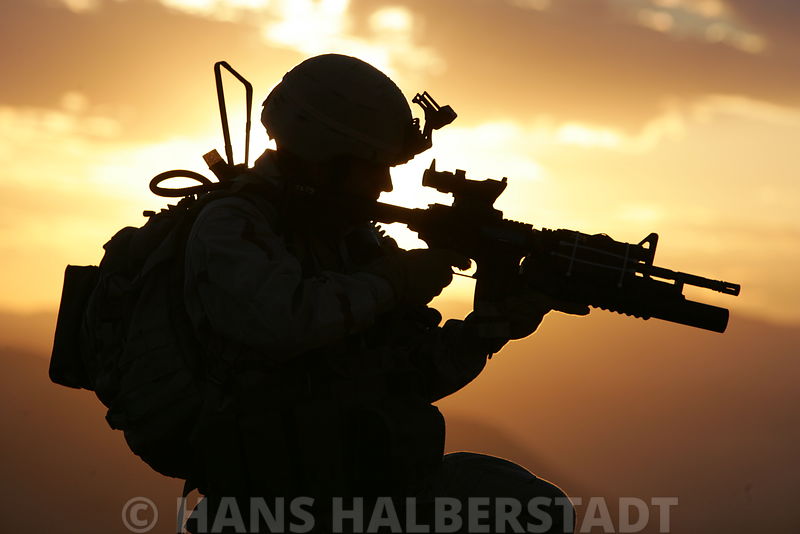 Soldier with M4 and M203
There's a saying that "No good photograph was ever made at noon." That over-simplifies the problem a bit, but sunrise and sunset are known as "magic time" to photographers. I like making sunrise and sunset photos like this and work hard to make them happen. 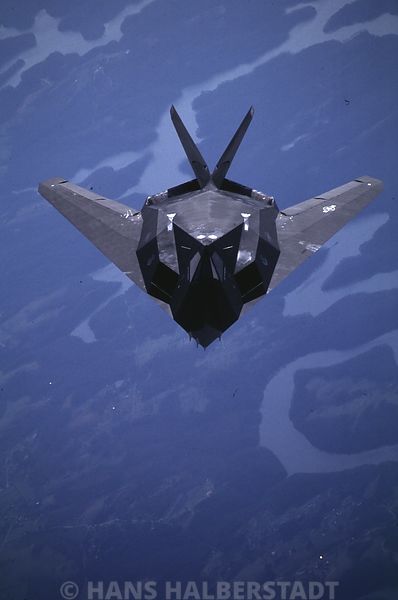 F-117 Stealth
"f8 and be there." The F-117 is approaching a KC-10 tanker and I am sitting next to the "boomer" who will put the refueling boom into the receptical just above the pilot. The experience is called a "tanker ride" and is an extremely rare privilege.
Powered by PhotoDeck